This article is a stub. You can help Fushigiboshi no Futagohime Wiki by expanding it.

The Waterdrop Kingdom is a kingdom of the Mysterious Star in Fushigiboshi no Futagohime. 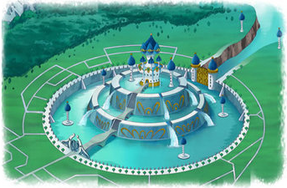 Its symbol is a blue drop.

It is responsible for the water supply of the planet. They make clouds out of seawater.

Mirlo: Princess of the Waterdrop Kingdom.

Narlo: Prince of the Waterdrop Kingdom.

Yamul: Queen of the Waterdrop Kingdom.

Pump: King of the Waterdrop Kingdom.

Comfort Springs: In the manga, there are springs known as the "Comfort Springs" located in the Waterdrop Kingdom. The water in the springs was used to cleanse the Sky Dragon.

Hidden Cave: There's a hidden cave behind a giant waterfall. Inside is mystical water that Milro uses as paint for her paintings.

Entries 4 - 6 and 9 translated by currytantou.

Within the Wonder Planet, the clouds are created by the Drop Kingdom.

I think it would be nice if it was sunny every day, but that won't do.

The rain precipitated by the Drop Kingdom is "The Rain of Blessing".

Surely, if it didn't rain, the rivers would vanish and plants wouldn't grow, then everyone would be in trouble.

Clouds are made possible with a mysterious light from the Sunny Kingdom, called "The Blessing of the Sun", and the ocean's water.

(Fine Speech Bubble: "The cute 'Beaba Clan' lives in the Drop Kingdom too.")

Milro, the princess of the Drop Kingdom, is like a genius when it comes to drawing pictures. ☆ She's even drawing a lot of the attention of the Wonder Planet's most famous artists.

There seems to be a Hidden Cave behind a giant waterfall in the Drop Kingdom. ☆ By using a Mystical Water that springs forth from within, Milro can create veeeery beautiful colors for her paintings!

Nalro-chan is still 0, a baby who was just born. ☆ Even though he can still only walk by toddling, he always gets away to somewhere. The people of the castle are always getting flustered. Kinda like he's a genius at scheming!

Entry #3 - They Talk with their Tails!☆The Beaba Clan

Words of the Beaba Clan

When they say 'Okay^_^', they'll hit the ground with their tail once.

When they say 'No X~X', they'll shake their tail left and right.

In a Beaba clan's home, they're sure to be raising a 'Keh-rokero' Keh-rokero can tell whether it will be raining or not.

Riri Tribe lives on top of the “PonPon Tree” in the Drop Kingdom. When you pass nearby the PonPon nut will pop and make a pon pon sound ☆

I get surprised since it burst at such a quick speed ☆

But it seems like there’s nothing inside the nut.

When you stroll at the PonPon Forest, you can hear the recital by the Riri Tribe ♡

When Riri Tribe moves their tails, they make ring ring sounds, like a bell ☆ What a lovely and clean tone ♡

Riri Tribe loves fruits and nuts from the tree ♡ Among all, their most favorite is “a~acorn”!

One a~corn can be shared with the whole family ☆

The Gaaga Tribe lives in Peanuts Lake in the Drop Kingdom. They look similar to ducks, but they cannot swim at all ☆ But they float swiftly on top of water.

2) Bow ties would help them in case they’re out of air.

3) Clothes that comes with a straw pump

4) Make it grow big and transform it into a life buoy!

So glad they did not sink ♡

Entry #6 - Sukusuku Tribe ☆ the Scent Orb is so Convenient

Sukusuku Tribe’s homes are located by the Sinking Swamp in the Drop Kingdom. The striped roofs are so cute ♡

In the bottom of Sinking Swamp, there lives a ve~ry huge frog named “Geronita”. I'll talk about Geronita next time, but she is such a difficult one.

They will give Scent Orb as a present to girls they like! It makes our hearts flutter! ♡♡♡

Sukusuku Tribe always carry a Scent Orb around their bodies ☆

1. Put inside mouth and swallow it

2. Let out vigorously through butt

There are many types of Scent Orbs.

When it is used to protect themselves from enemies, it will release a smelly and detestable smell ♡

When they want to express feeling of affection, it will release a lovely bittersweet smell ♡

Milro of the Drop Kingdom is a very kind sister. She helps the busy queen by looking after her little brother Nalro* She says it's a lot of fun to do things like changing his diapers and giving him milk! Nalro also loves being together with Milro

Milro loves to make picture books! By attaching a story to the pictures that she drew herself, she reads to Nalro before his midday nap* Wow! Now we want a cute little brother of our own! I'm sure that Milro will become a wonderful mother!

Entry #8 - Geronita of the Sinking Swamp

Geronita loves to sing! Her number one song is the "Gerogero Song" she made herself. By singing in an incredibly loud, hoarse voice all day, she's a big nuisance!

Even when scolded by Queen Yamul to sing in a slightly softer voice, she didn't listen at all! As a result, the queen got angry and imprisoned Geronita in a den at the bottom of the Sinking Swamp.

Right now inside that den, she appears to be scheming to create the Geronita Kingdom.

Munjala Tribe lives on top of the Snow Mountain in Waterdrop Kingdom ☆ It’s a ve~ry cold place that snows throughout the year.

The homes of the Munjala Tribe are made of ice! Apparently, they were made by cutting out ice on a lake at the top of the mountain and stacked together like bricks ☆ They remove ice from the lake and carry them.

Munjala Tribe lives by the lake. They live off fishing an ancient “UmaUma Fish” ☆

Milro loves Artney-sensei, who taught her about painting. For Valentine's Day, Milro had a dress tailored that would go well with the emerald brooch she got from him for her birthday! I wonder if Sensei will notice the emerald on her bosom.

Ah,  Milro's heart races when Sensei's gentle face is right next to her!

Community content is available under CC-BY-SA unless otherwise noted.
Advertisement