"Fine! Rein! You two always helped me with your smiles. Even when I was scared, even when I was sad, I felt reassured when I saw you two smiling. Now it's my turn! Let me protect everyone's smiles!"
— Lione to Fine and Rein in "The Final Prominence ☆ Princesses Never Give Up"

Lione (リオーネ; Riōne) is a secondary character in Fushigiboshi no Futagohime. She is the princess of the Flame Kingdom and Tio's older sister. Despite her negativity, she won the title of the Best Smiling Princess thanks to Fine and Rein.

Lione is a tall girl with long, straight, orange hair tied into a ponytail and round, orange eyes. Lione regularly wears her princess outfit which includes a white ribbon to support her ponytail and a white tiara studded with a small blue gem. Her dress is light orange at the top and white at the bottom printed with many flames. The sleeves are puffy and she wears long, white gloves. At the end of her dress are light orange frills.

Her school uniform consists of a white turtleneck, green blazer, light green skirt, and green boots. She ties her hair up in a ponytail with a yellow ribbon.

When Fine and Rein met Lione for the first time, she could only see the negativity to her problems such as when the Blessing of the Sun stopped working right before it was her turn to dance, calling it a sign of something bad about to happen.

She is also scared of dancing in public because she always gets nervous and messes up, but Fine and Rein encouraged her saying they won't laugh even if she messes up. Lione started to gain confidence from there on and smiled at the good things that happened. Lione also has the power to understand the feelings of the Bo Dragon. She is very supportive of Fine and Rein carries a lot of trust in them.

Lione escaped the Flame Kingdom's airship on a vehicle with a parachute and went inside the Sunny Kingdom. Rein and Fine then chased after her and they all collided as she lands. After introducing each other, Lione explains how she is afraid of being in public and if she dances, she's sure to stumble and humiliate herself. Rein and Fine then encourage her to dance and Lione starts to feel better.

When the Princess Party begins all the princesses have a turn dancing with Prince Bright. When it's Lione's turn, all the lights powered by the Blessing of the Sun lose their light and Lione becomes depressed believing that it's an omen saying she shouldn't dance.

Rein and Fine uses this chance to use the power of Prominence. They use this power to shine a spotlight on Lione and she accepts Bright's offer to dance. Lione is able to dance without making any mistakes and has fun. She smiles beautifully and wins the Princess Party, earning the title of Best Smiling Princess.

Lione receives visits from Fine and Rein, then explains to them that there's smoke coming from Bo Mountain, a volcano near the kingdom, claiming that without the Blessing of the Sun, the energy of the Blessed Flame has weakened, and the inhabitants will get in trouble because they aren't used to the cold. When Fine and Rein see the Flame Kingdom soldiers heading for the mountains and ask why Lione states that the Bo Dragon that lives in the crater of the mountain is the responsibility of causing the smoke and decided to battle him. 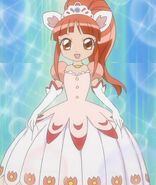 Lione in her princess outfit