"You must not cry! Smile!"
— Fine to Elsa and Truth in "Large Reckless Driving Black Crystal"

Fine (ファイン; Fain) is the main protagonist of Fushgiboshi no Futagohime and one of the twin princesses of the Sunny Kingdom and along with her sister, Rein, she is known as one of "the most unprincess-like princess since the beginning of the Mysterious Star".

Fine's appearance is mostly inherited from her mother, Elsa. She is a cute girl with bright red eyes and reddish fluffy hair. Her hair is usually tied up in loose pigtails with gold rings. Fine's usual outfit consists of a red hat, a cherry blossom coat, a short red skirt, white stockings, and a pair of pink boots.

Fine is a warm-hearted girl and cares deeply for her friends and family and later Shade. She is very cheerful and optimistic. Another quality of hers is her talent in athletics, dancing being her only weakness in it. Fine is also very gluttonous - the first thing she thinks about when she goes to parties is food. Unlike her sister, she is scared easily, especially by ghosts.

Fine doesn't mind losing the Princess Parties so long as she can make those around her proud.

Although Fine is similar in some aspects she does have differences between her anime and manga counterparts.

She was the first one to open up to Eclipse/Shade, believing that he was "not a bad guy".

She and Shade are the only ones who can understand Milky when she speaks. Poomo claims that this is probably because they both love to eat.

Fine seems to be more sensitive than her anime counterpart. When the Sky Dragon was lashing out and Bright said he may have to mobilize the Jewelry Kingdom army, Fine cried, saying that the dragon was only like that because it was suffering. At the time, she was the only one who noticed its pain.

Sometimes she becomes scared to the point that she's unable to do anything, however, she can shake out of it pretty quickly if Rein is endangering herself, showing how much she cares for her sister.

Although she was scared, when she noticed Rein jump off of the Jewelry Airship and Poomo told her that Rein was in danger of her magic wearing off, she tried to jump off herself to save her sister.

Fine also refers to Rein as her "better half" in the manga, showing just how much she respects and loves her sister.

Fine, along with her twin sister, Rein, are known as "the most un-princess-like princesses since the beginning of the Mysterious Star". They are first seen looking at the other kingdoms' airships as they land for the first Princess Party. Suddenly, a princess named Lione hops out of the Flame Kingdom's airship on a parachute and escapes into the Sunny Kingdom. Fine and Rein chase after her, and they all collide as she lands. After introducing each other, Lione explains how she is afraid of being in public and if she dances, she's sure to stumble and humiliate herself. Fine and Rein then encourage her to dance and Lione starts to feel better.

When Lione leaves, Fine and Rein then experience a bright light and an elevator appears. Rein walks towards it dragging Fine along. Fine and Rein end up in a field of light and find a ghost that introduces herself as Princess Grace, a princess who sacrificed her life to save the Sunny Kingdom when it's light was going to disappear. She explains that she let them into the center of the Blessing of the Sun to explain that the light is going to disappear within a year once again and asks Fine and Rein to save it. However, because they aren't capable of doing it yet, Princess Grace gives them a trial they need to help as many people as they can in the Mysterious Star with the help of Poomo using Prominence.

When the Princess Party begins, Prince Bright offers to dance with the princesses. But, Fine refuses and Rein dances with him instead. However, when it's Lione's turn, all the lights powered by the Blessing of the Sun loses its light and Lione becomes depressed with all the negativity. Fine and Rein uses this chance to use the power of the Prominence which changes their hairstyle and attire into a form of a princess. They use this power to shine a bright light on Lione and she accepts Bright's offer to dance. Without making any mistakes, Lione manages to be the Best Princess earning the title of the Best Smiling Princess. However, misfortune comes Fine's way when Milky eats all the cake that was waiting for Fine, giving her a new rival.

Fine is first seen when she's calling to Rein to hurry up as the Sunny Kingdom's Party is about to begin. The two decide to go pick flowers to greet their arriving guests when Fine notices that the flowers are looking droopy. The two dwell on it for a moment before rushing to climb to the castle's roof. As the airships arrive Fine and Rein throw their flowers in the air and welcome their guests. As the two congratulate each other on a job well done, they slip and fall off the roof! Rein gives a quiet plea for someone to rescue them and Princess Grace does.

In Episode 13, Fine realized that her heart beat increases when she was with Eclipse. She also got rather upset when Eclipse yelled at her for all the troubles she caused. Although, she seemed confused as to why, not fully realizing she began to develop a crush on him. In this same episode, it is also made perfectly clear that Prince Bright has feelings for Fine.

In Episode 44, Fine becomes envious when Shade chooses to dance with Rein first and feels pain in her heart when Sophie says they make a cute couple. Fine decides to let the two dance together and leaves. When she learns that Shade wasn't going to dance with Rein in the end, she becomes relieved, but doesn't know why.

In Episode 45, Shade comes to her rescue when she's lost in the maze. When Fine trips, he catches her before she falls.

In the first season finale (Episode 51), Shade asks Fine to dance which she happily accepts, showing that his feelings have shifted to her.

In the manga, Fine falls for Eclipse at first sight in the first chapter, blushing and feeling her heart skip a beat when she turned to look at him. She also seemed a little down once she realized that Eclipse had left.

During the second chapter, Bright blushes while he holds her hand and tells her that he would protect her. She seems a little shocked by this, but it became clear that Bright had begun to develop feelings for Fine. After she and Rein save the Sky Dragon, when Eclipse tries to leave Fine stops him, thanks him for saving Rein, and asks for his name. Eclipse hesitates before telling her and then leaves. When Rein calls him a weirdo Fine says he's a good guy, weird or not. Fine then repeats his name and blushes.

Unlike her anime counterpart, Fine becomes jealous when she sees Rein and Eclipse together in the gardens and sees him about to confess. Fine cries and vows to never speak to Rein again, although when Rein attempts to apologize, she does talk to her and tells her how it isn't fair that Eclipse likes her. Once the two make up Rein tries to push them together. Despite that, by the final chapter, Shade continues to pursue Rein.

Bright continues to have feelings for Fine, but the manga leaves it ambiguous over whether or not she returns his feelings in the end.

Rein is Fine's twin sister and a princess of the Sunny Kingdom! Both of them are trying to save the Mysterious Star and its inhabitants with the power of Prominence. Fine cares deeply for her sister, going so far as to refer to Rein as her "better half" in the manga.

Prince Shade is Fine's main love interest in the anime. Fine was the first person to open up to Shade while he was still pretending to be Eclipse believing that he was not a bad guy and slowly develop feelings for him. By the end of the first season finale Shade returns Fine's feelings and they are still together in next season. In the manga Fine fell in love with him at first sight. However, her feelings remain unrequited as Shade continues to pursue Rein.

Bright is in love with Fine in the first season of anime and in the manga. He always tries to please her and is very excited to see Fine each time they happened to run into each other. However, by the finale of the first season his feelings for Fine fade as they shift to Rein. When she becomes scared in the manga Bright is quick to offer his protection to her. In the manga, he continues to hold feelings for Fine, but it remains more ambiguous if Fine ever returns them or not.

Fine at the bottom row, second to the right. 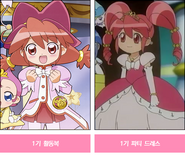 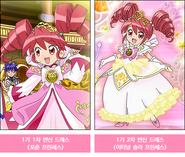 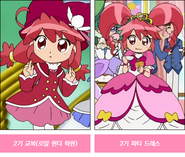 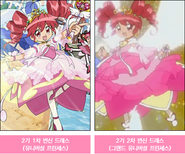 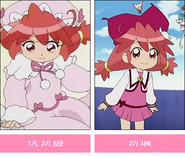 grand pararira
Add a photo to this gallery 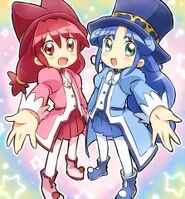 Fine on the left. 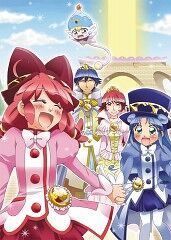 Fine with her family. 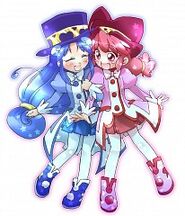 Fine on the right with Rein. 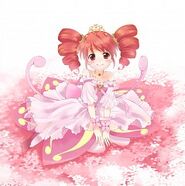 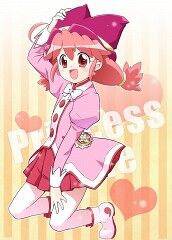 Fine in her normal outfit. 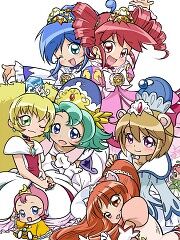 Fine at the top right with all the princesses. 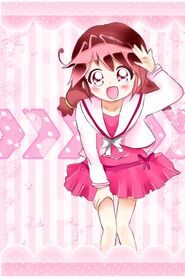 Fine in her Pink summer uniform

Fine (at the left) and Rein embracing 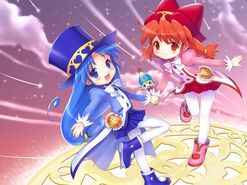 Fine and Rein holding hands and Poomo
Add a photo to this gallery
Retrieved from "https://fushigiboshinofutagohime.fandom.com/wiki/Fine?oldid=8808"
Community content is available under CC-BY-SA unless otherwise noted.